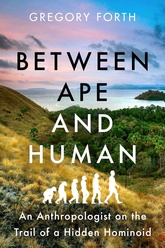 Between Ape And Human: An Anthropologist On The Trail Of A Hidden Hominoid

Could a missing link still be alive?

Follow along on a remarkable investigation by a leading anthropologist into the possible survival of a primitive species of human into recent times—and its coexistence with modern humans.

While doing fieldwork on the Indonesian island of Flores, Gregory Forth met people talking about half-apelike, half-humanlike creatures that once lived nearby. Over the years he recorded what locals had to say about them while searching for an explanation. Then in 2003 came the ‘hobbit’; several skeletons of a small-statured early human species alongside stone tools were excavated in a cave in western Flores. Named Homo floresiensis, this ancient hominin was believed to have lived until 12,000 years ago, but had the residents of Flores seen them?