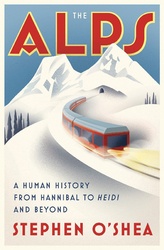 The Alps: A Human History from Hannibal to Heidi and Beyond

For centuries the Alps have seen the march of armies, the flow of Crusaders, the feats of mountaineers, and the dreams of engineers. Some 14 million people live among their peaks today. Stephen O'Shea takes us up and down these majestic mountains on a 500-mile arc across France, Italy, Switzerland, Liechtenstein, Germany, Austria, and Slovenia.

O'Shea explores the crossing of Hannibal and his elephants; reveals the Alps' influence on culture, from Heidi to The Sound of Music; and visits locales including the site of the Italians' retreat in World War I, the spot where Arthur Conan Doyle staged Sherlock Holmes' death scene, and Hitler's notorious aerie, the Eagle's Nest.

The Alps is a breathtaking blend of travelogue and historical narrative.

"An ebulllient narrative. . . . This spirited jaunt into the peaks of Europe may inspire readers to pack their bags."-Kirkus Reviews

Stephen O'Shea spent many years as a journalist in Paris and New York. He is the author of several books, including Back to the Front: An Accidental Historian Walks the Trenches of World War I and Sea of Faith: Islam and Christianity in the Medieval Mediterranean World.