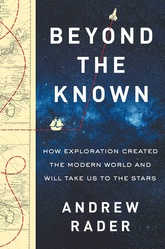 Beyond The Known: How Exploration Created The Modern World And Will Take Us To The Stars

Travel beyond the known

For the first time in history, the human species has the technology to destroy itself. But having developed that power, humans are also able to leave Earth. After millions of years of evolution, we’ve arrived at the point where we can settle other worlds.

Beyond the Known examines major periods of discovery and rediscovery, from Classical Times, when Phoenicians, Persians and Greeks ventured forth; to The Age of European Exploration, which saw colonies sprout on nearly continent; to The Era of Scientific Inquiry, when researchers developed brand new tools for mapping and traveling farther; to Our Spacefaring Future, which unveils plans currently underway for settling other planets and, eventually, traveling to the stars.

“Andrew Rader’s Beyond the Known is a smashing narrative about the history, the promise, and the innately human drive to explore, from antiquity to today to the coming Star Trek era. I could not put it down!" —Alan Stern, Principal Investigator of NASA’s New Horizons Mission, and author of Chasing New Horizons: Inside the Epic First Mission to Pluto